“Food and social cohesion in north Milan: From the urban court to the community ‘food’

After the first event in Cinisello Balsamo (May 9) now it’s the chance for Cusano
Milanino.

A project created and developed in Cinisello and Cusano, that is involving citizens and organizations from north of Milan.

In this area, the gradual disappearance of the fundamental elements of the agricultural roots of the urban fabric and the depersonalization that characterizes the current systems of production and distribution of food, have gradually deprived the landscape and the food of the possibility of being, in the context of the city, sharing vehicles, elements of social cohesion and collective identity factors.
With the aim of returning this values to the landscape and the food, the project proposes opportunities for sharing the cultural heritage of local history, with particular
interest in landmarks of Northern Milan, where agriculture and urbanity have coexisted in a very intertwined way: the agricultural courts of Cinisello and Balsamo, the farms and the courts of Cusano, the living example of Garden city of Milanino and its food self-sufficiency project.
The other side of the project consist of the shared construction of the Food Communities in Nord Milano, resources that can enhance all places, in a context where food production has moved away from the city and the food  is standardized, we are working for a return to ‘food personality’, bond with the territory, identity value, a network made up of people who are committed daily to enhance and ensure a good food, thanks to the naturalness of
raw materials, clean, through the respect of ecosystems and the environment, right,
because it guarantees dignity and fairness to those who eat and those who produce. In connection with the themes proposed by EXPO 2015.
In Cusano Milanino, Saturday, May 30, at Sala Moneta, in Via Matteotti, we are inaugurating the exhibition: “Courts, villas, farms, shops and artisans in the Cusano
‘900’, organized by the ‘Amici del Milanino’ (Friends of Milaninno) in collaboration with the ‘Centro Documentazione Stoica’ (Centre of Historical Documentation) of Cinisello Balsamo.

This exibition will continue until June 14.
On June 7, “Quanto Basta” the market for small producers of biodiversity, from Cinisello, where it is organized on the second Saturday of each month, it moves in Cusano Milanino, in via Matteotti. There will be children’s workshops and meetings with the producers. In the afternoon, from 17:00 the ‘Amici del Milanino’ are offering “Music Taste” with a party accompanied by the music of the 50’s “The Paul & Roosters”. After this party there will be a special tasting of an appetizers selection. During this party Slow Food will present the exhibitors of “Quanto Basta – the good of the North Milan”. On June 14 and July 5 two evenings guests in the garden of a villa in Milanino, tasting good food accompanied by good music.
Other appointments in Cinisello with tours, tastings, theater, the market “Quanto Basta”, workshops for adults and children, games with tops: June 12 to 14.
The program of the project includes several events until the end of October. 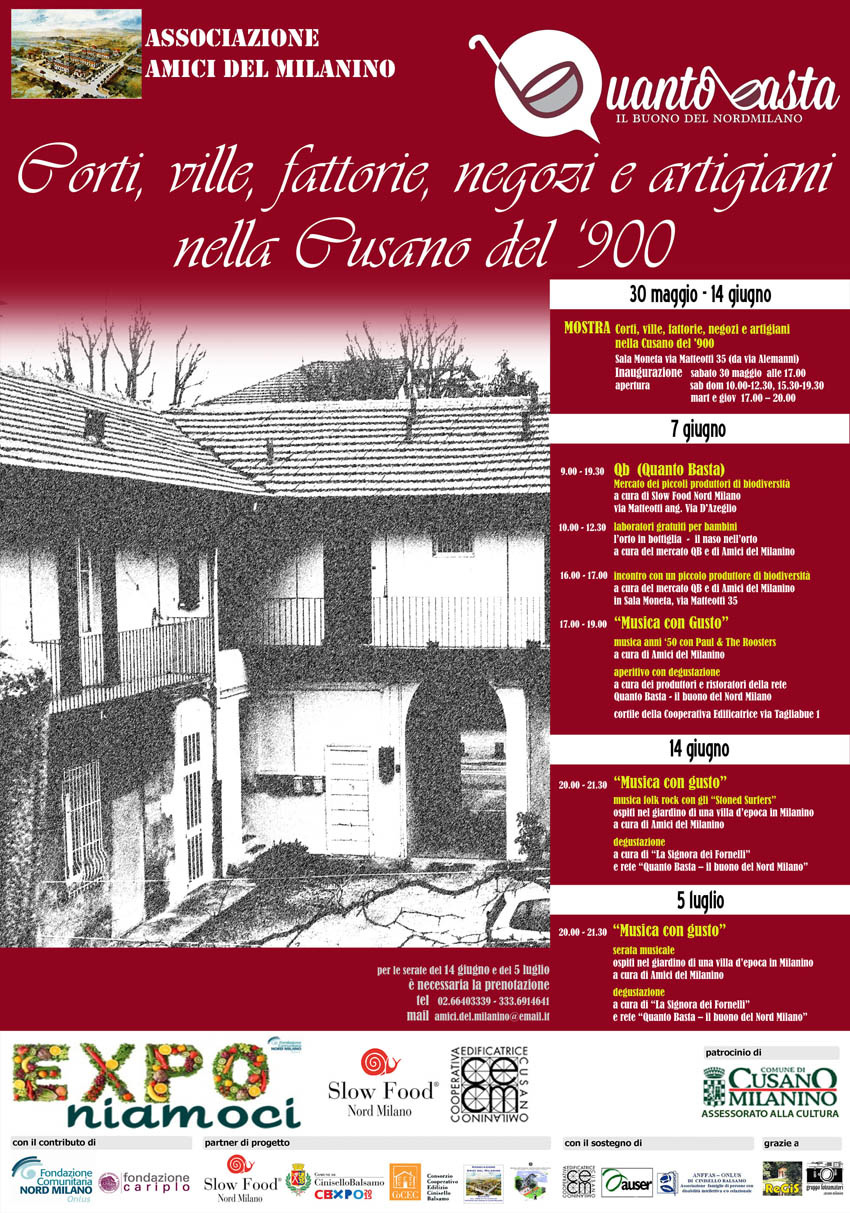